The 2016/2017 UEFA champions league draw gave the best of welcomes to new comers and current English Champions Leicester city. The foxes have been drawn into a group which pairs them with FC Porto, Club Brugge and FC Copenhagen. Should they show the tenacity of last season, i see them qualifying. 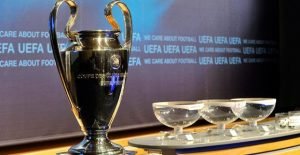 Tottenham Hotspurs also ran out with a fair draw. Spurs are drawn against the into a group containing  Bayer Leverkusen, Monaco and CSKA Moscow. A very fair group in all honesty.

The other English representatives got tougher draws. Manchester City will have to get past FC Barcelona while Arsenal will lock horns with Paris Saint Germain.

In another news, Cristiano Ronaldo was named the UEFA player of the year 2016. The Real Madrid forward guided both club and country to top UEFA honours. Real Madrid won the Uefa champions league against city rivals Athletico Madrid in May.

Portugal inspired by Cristiano Ronaldo won the 2016 UEFA Euro in France against all odds having had a very poor group stage and playing the finals against the host country france.

We will like hear your views on the champions league draw and the chances of the teams in making it out of their respective groups.