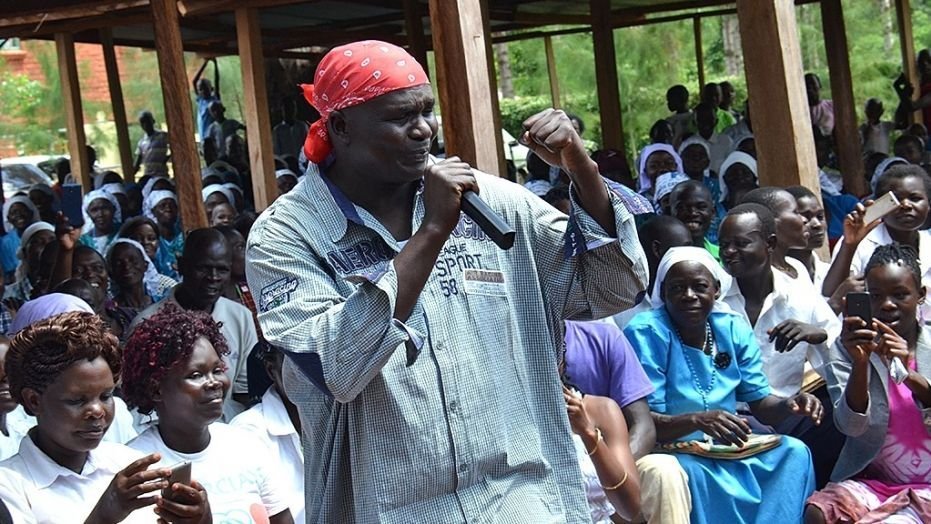 The Suspended Kenyan Catholic priest is Rev. Fr. Paul Ogalo whose nickname is “Sweet Paul”  The priest has been told to “choose between being a rapper and a Catholic priest”.

Fr Ogalo changes from his vestments into his rapping attire of a white shirt, black shorts, and a red bandana to rap for the congregation, who danced along to the music he raps.

Speaking on the suspension of Fr. Ogalo, the Catholic Bishop of the Homa Bay Diocese in western Kenya, Bishop Philip Anyolo stated that “the sacred and the secular could not mix” However, Bishop Anyolo said Ogalo can use rap to preach to young people but not on the altar.

The priest now has one year to think about his life and to choose whether to continue as a rapper or a Catholic priest.

On his part, the priest who is yet to react to his suspension had earlier stated that he uses his rapping to bring young people to the church and later introduce Christ to them.

“We need to take care of the interests of youths in our churches,” he said. “We need to change the way we do things.”

On his part, the youth leader of St. Monica parish, Violet Menya said not only do many young people come to church because of the rap music, they keep coming back.

“We are happy that his style of preaching is attracting many youths to church. He has mentored very many youths to leave … drug abuse and embrace farming, business and other activities,” Menya said.

Benard Oketch, a 28-year-old member of the congregation said he will stop attending church because of the priest’s suspension.

“Fr Paul has been our mentor. He uses the language youths understand,” Oketch said. “[Fr Ogalo] has saved thousands of youths” from drug abuse.

However, the bishops of the diocese rejected methods, maintaining that they are against Catholic Church doctrine.

Father Charles Kochiel, the judicial vicar of the inter-diocesan tribunal of Kisumu, said Fr Ogalo is suspended for a year in order to “reconsider his ways.”

“There are ways of doing things,” Fr Kochiel said. “There are certain things the Church promotes in the society. If we mix … what the secular and church institutions do, then definitely people are going to read different messages.