Pregnancy Test: How to Carry out Home Pregnancy Test And Interpret Your Result - Dewlite
Skip to content
Spread the love

While many women just use the pregnancy symptoms to know when they conceive, pregnancy test remains the best way to confirm if you are pregnant or not. These tests are simple, cheap and can be done right at home. So every woman should actually know how pregnancy test works.

What Is a Pregnancy Test

A pregnancy test is any test used to confirm if a woman is pregnant or not. The test can be chemical in which case the test method is based on the presence of a pregnancy hormone called Human Chorionic Gonadotropin (HCG).  The tests check if HCG is present in your urine or blood.

This hormone is produced after a fertilized egg attaches to the wall of the womb. This process is called implantation. It usually occurs six days after you conceive. It may also occur any day within the first twelve days after your have conceived. If you’re pregnant,  HCG continue to rise rapidly, doubling every two to three days if you are pregnant.

Pregnancy test can also be inform of medical imaging via Ultrasound scanning. This is usually done by your doctor or a professional radiographer. 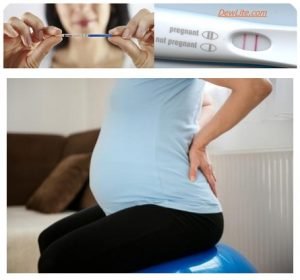 Methods and Types of Pregnancy Test

There are three major types of pregnancy tests with one readily done at home.

This is the commonest way of testing for pregnancy. It makes use of a pregnancy test kit which checks for the presence of the B-sub unit of HCG in urine. The test kit is also cheap and can be gotten without a doctor’s prescription. Most women do this test even before seeing the doctor. Can be done one week after you miss your period.

How to do Urine test for Pregnancy: This is very simple because most of the test kits come with instructions. Just follow the instructions and you are good to go. Simply you just urinate into a liitle container or just hold the kit and urinate over it in read the result in minutes depending on the instruction.

The results of a home pregnancy test may show up as a line, a color, or a symbol such as a “+” or “-” sign. The modern digital tests produce the words “pregnant” or “not pregnant.” It all depends on the type of pregnancy test kit that you are using.

This test is usually done by your doctor. It is also done to check for HCG in the blood. EPF test is also a form of blood pregnancy test. Blood tests for pregnancy can detect pregnancy earlier than a home pregnancy test, or about six to eight days after ovulation.

The Blood Pregnancy Test For HCG: These tests can be qualitative test in which case you just check if B-HCG is in the blood or not. More importantly, this test can be quantitative. This measures the actual amount of the hormone in the blood. This can be very important in monitoring the progress of the pregnancy. It can also tell if the pregnancy is an ectopic pregnancy or normal pregnancy.

YOU MAY ALSO LIKE: Pregnancy Symptoms: Early Signs Of Pregnancy That Every Lady should Know.

How Accurate Is The Home Pregnancy Test Result

Most of the home urine pregnancy test kits have an accuracy of about 99%. So it is very accurate. To increase the accuracy of the urine HPT, do at about a week after ovulation when enough HCG might have  been produced. Also the test is best done first thing in the morning. This time, your urine is more concentrated.

Causes of a False Positive test

The possible causes of getting a false positive results will include all but not only the following:

Causes of a False Negative Result

Some companies and health It is important to know that you cannot do a pregnancy test online. Some companies and health facilities however offer women opportunities to pay for the test online before going to do the test proper in their facility or labs. The result might be given to you after a day or two via phone or online. These online pregnancy tests start at about $40.

At about five weeks’ of pregnancy you can see  yolk sac.  The heartbeat may be seen as early as six weeks, and is usually visible by seven weeks’ gestation.

If you have any complaints, questions and contributions to make concerning pregnancy test or other questions about pregnancy, leave your question in the comment box below and we will get back to you as soon as possible.

You can also follow our updates by liking our Facebook page, Dewlite.com or on Google+ on Dewlitekendricks.